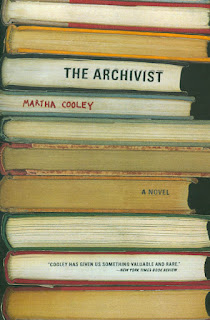 In the past two and a half years, I’ve studied a lot of works that inspired T.S. Eliot in his formative years. The goal of my self-imposed research project is to understand why a man who struggled so desperately to synthesize all of the world’s major religions and philosophies eventually embraced Anglo-Catholicism. Attempting to answer this question means trying to understand one of the most enigmatic minds of the 20th century. No easy task…. though, judging by the number of books and articles published on the subject, many have tried.

This week, I took a break from works that inspired Eliot to read a work of fiction about him – more specifically, about his transatlantic correspondence with his first love Emily Hale. Martha Cooley’s debut novel The Archivist is the story of Matthias Lane, a stuffy Princeton librarian who guards the “approximately 1200 letters and other enclosures” that Eliot sent to Emily Hale between 1930, when he left his first wife Vivienne, and 1956, when he married his second wife Valerie. (Despite Eliot’s pleas that she burn the letters, Ms. Hale instead bequeathed them to with the stipulation that they were not to be read by anyone until 50 years after her death.) When an eager young grad student named Roberta insists on seeing the letters, Matthias flatly refuses to grant her access. She persists, and the two strangers come to know each other through their assumptions about Eliot.

Roberta believes that the letters to Emily Hale will provide a better understanding of why Eliot “was driven from the arms of his neurotic wife into those of a neurotic church,” as well as offer an explanation of “what that conversion cost him.” It is clear that Roberta identifies with the dejected women in Eliot’s life – both of whom, she contends, Eliot loved only as abstractions. Understanding the poet’s mind will help her come to terms with people in her life who likewise have held her at a distance – parents who concealed their Jewish ancestry, and an ex-husband who abruptly walked out on her.

Matthias has his own personal reasons for maintaining a sacred duty to protect the letters. Years earlier, he had his wife committed to a mental hospital – just as Eliot had Vivienne committed. Matthias’s wife eventually committed suicide, leaving behind a journal which explained how this decision led to her demise. She asked that the journal be destroyed; Matthias read it instead. Ever since, he has lived with the guilty truth that he was unable to love his wife the way she loved him. To him, she was an abstraction – like a book in a library. Later, when Roberta tells Matthias about her ex-husband, he realizes that she is describing him as well: “He belonged to a special, small class of hugely gifted people – mostly philosophers, mathematicians, scientists – you know the types I mean. They’re people who live for the experience of honing their abstractions. They refine their thinking until it becomes lustrous and elegant, like burnished gold. Everything else is secondary.”

Matthias remembers that his wife read Eliot “because he understood how the sacred resides in time, is time.” For her, Eliot’s poetry provided vital answers. For Matthias, it provides vital questions… And that’s all he expects, or wants. Matthias appreciates Eliot’s unwillingness to simplify anything: “For me, reading his work is like trying to intercept a butterfly. It comes so close you can see its markings, the luminous wings, and then as you extend a hand it’s gone – hidden among other flickering objects of consciousness. There’s a pleasure in this approximation, I suppose, and even in the failure to apprehend. I don’t mind the obscurity of Eliot’s verse. (What good, after all, is an insect pinned on velvet, gorgeous but dead?)” Roberta, like Matthias’s first wife, wants intimacy. For Matthias, as for Eliot, intimacy seems comparatively irrelevant.

In a 1931 essay, Eliot himself said, “There are only four ways of thinking: to talk to others, or to one other, or to talk to oneself, or to talk to God.” The implication is that you can’t do more than one at the same time. Matthias seems to understand that this choice has already been made for him: “Books never cease to astonish me,” he says, “When I was a child, I knew – in the incontestable way that children know things – that God was an author who’d imagined me, which is why I (and everyone else) existed: to populate His narrative. My task was to imagine God in return: this was all He and I owed each other.” In the beginning, he doesn’t believe that he owes Roberta anything. Instead, he aims to protect her from the truth – the way both he and Eliot “protected” their wives by having them committed… And, in the process, protected themselves from the “fierceness” of women who experienced life as so much more than an abstraction.

Though The Archivist pales in comparison to similar novels like Graham Greene’s The End of the Affair or Philip Roth’s The Human Stain, it formulates an intriguing question for Eliot readers: Did T.S. Eliot abandon Vivienne and Emily in order to protect them, or possibly to protect himself? Did he perhaps believe that it was necessary for him as a writer and an Anglo-Catholic, to be alone... To resist being loved by another human being? “What kind of faith allows a man to diagnose the spiritual illness of his culture so well, and at the same time view his wife as some kind of witch who needs to be walled in? Even if she is sick?”

Of course, these are questions that have already been asked in numerous biographies – most notably, T.S. Eliot: An Imperfect Life by Lyndall Gordon and Painted Shadow: The Life of Vivienne Eliot by Carole Seymour-Jones. And it’s safe to assume that people will keep trying to answer such questions well into the 21st century, especially as new research materials become available... The Complete Prose of T.S. Eliot is scheduled to be published in a 7-volume set in the Fall of 2008. Around the same time, Valerie Eliot is expected to publish a revised edition of the only existing volume of Eliot’s letters (covering the first seven years of his marriage), simultaneous with the publication of a second volume (covering the five years leading up to his conversion). Five more volumes of collected letters are expected in the distant future… but until , when the Emily Hale letters become available, some of the most tantalizing questions will remain unanswered.
Email ThisBlogThis!Share to TwitterShare to FacebookShare to Pinterest
Labels: T.S. Eliot