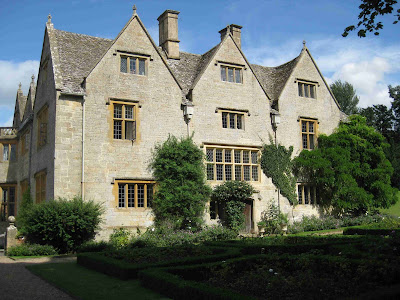 In her book Landscape as Symbol in the Poetry of T.S. Eliot (UP of Mississippi, 1978), Nancy Duvall Hargrove compares and contrasts the key landscape images in Eliot’s poetry: “These are the city [symbolizing] (boredom, triviality, sterility), the country (release, fertility, rebirth), the desert (chaos, terror, emptiness), the garden (ecstasy, innocence, serenity), and the sea or river… [symbolizing] eternity, destruction, creation, mystery, life, death, sterility, and physical beauty…” She regards “Burnt Norton” as the “most crucial” of the Four Quartets because it introduces a complex symbolic landscape that is central to the Quartets as a whole: that of the rose-garden.

Eliot happened upon this particular rose garden, adjoining a manor house in rural Gloucestershire, England, in the fall of 1934. The manor house and the garden sit directly in front of the site of a much older manor house, which was burned to the ground in the 18th century by its suicidal owner Sir William Kyte. “The [burned] house,” observes Hargrove, “suggests the transitory quality of human existence.” Certainly, Eliot’s poem “Burnt Norton” is about the transitory quality of human existence… but Eliot may not have known anything about the dark history of Burnt Norton when he composed the poem.

The current owner says that the house would have been vacant at the time of Eliot’s visit, and suggests that the poet discovered the gardens only by happy accident. Will Gray, a student of the T.S. Eliot Summer School, remembers that on a previous trip to Burnt Norton in 2004, he was told that Eliot probably entered first through the “hidden gate” in the darkest, driest corner of the property – identified by the current residents as “the waste land.” The property is essentially divided into four quadrants, like chambers of the heart, and Eliot naturally would have proceeded from an upper chamber toward a lower chamber, then looked down on the dry, concrete pools that he alludes to in the poem. Beyond the pools (which the owner says never held water), he might have turned right into the present-day rose garden.

What matters is not Eliot’s route through the gardens of Burnt Norton, but the impression that the place made on him – and the impression that it makes on us, the readers of Eliot’s poetry, by extension. The garden, as Hargrove says, is an extremely complex symbol. For Eliot, it might be said to symbolize childhood, innocence lost, Paradise lost, time past and unrecoverable, isolation, fantasy, earthly delights, the supernatural, fear, innocence recovered, Paradise regained, timelessness, death, the life after death, deathlessness…

Personally, the garden-as-symbol makes me think of my father, who spends much of his time these days tending his own garden, and of my mother, who likes to photograph different gardens – and all the living things, great and small, within them. It reminds me of the rural Virginia landscape that I grew up in, and makes me long for the color green (greatly lacking from the landscape of Southern California) and for fresh produce, for rain, and for silence. It also makes me think of the more exotic Huntington Gardens in San Marino, California – so strange and colorful that they seem like the setting of a fairy tale, completely removed from the real world.

After wandering around Burnt Norton for a while, I sat down on a quiet bench and wondered what Eliot and his companion, Emily Hale, had talked about during their visit. Instead of their voices, I heard the singing of birds – voices from the poem. For a split second, it was not hard to imagine T.S. Eliot and Emily Hale sitting on that same bench in 1934. Things at Burnt Norton haven’t changed much in the intervening years. The moment was interrupted by the sound of a plane flying overhead. Eliot would have not have experienced such an interruption in 1934. Following this line of thought, the plane suddenly seemed to me like a harbinger of World War II and the London blitz, a foreshadowing of Eliot’s final quartet. (Time past and time future…) A moment later, that thought was also gone.

The current owner of Burnt Norton says that the property appears “brooding and melancholy” at night. We left too early to verify that, but the idea of the landscape wrapped in gothic shadows certainly suits the conclusion of Eliot’s poem -- the poet’s expression of sorrow at the passing of the timeless moment. Professor Mark Ford, in his lecture on “Burnt Norton,” acknowledged this solemn tone and suggested (to my mind, at least) that the poem could be read as a kind of ghost story, complete with “creepy kids” (dead?) laughing the garden and a sense of uncanny dread about what’s behind the door and just beyond the gate: death or deathlessness?

“Burnt Norton” is not just a meditation, but a mediation between fear and love. The only quartet conceived as a stand-alone poem, “Burnt Norton” symbolizes (to use Eliot’s terminology) the end and the beginning. 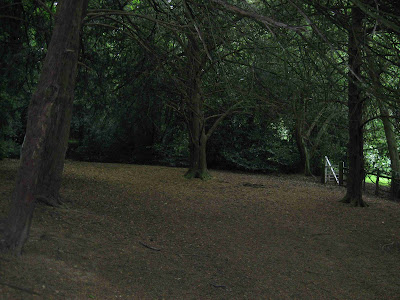 ... Through the first gate,
Into our first world... 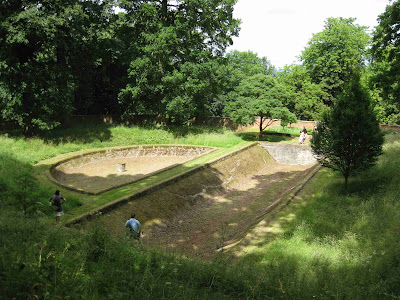 Dry the pool, dry concrete, brown edged,
And the pool was filled with water out of sunlight. 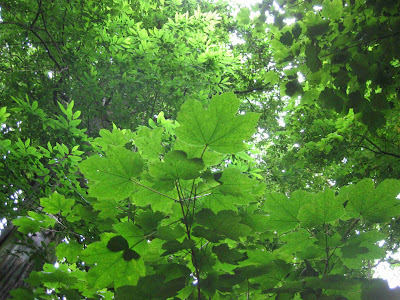 Go, said the bird, for the leaves were full of children,
Hidden excitedly, containing laughter. 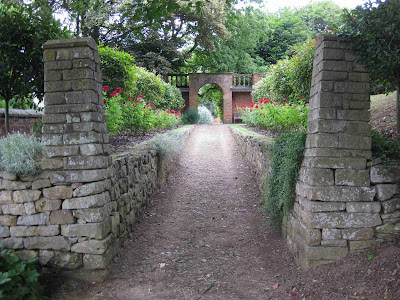 Footfalls echo in the memory
Down the passage which we did not take
Towards the door we never opened
Into the rose-garden... 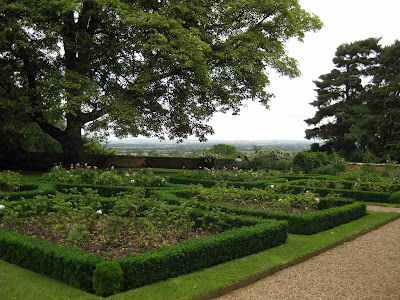 ... My words echo
Thus, in your mind.
Email ThisBlogThis!Share to TwitterShare to FacebookShare to Pinterest
Labels: T.S. Eliot