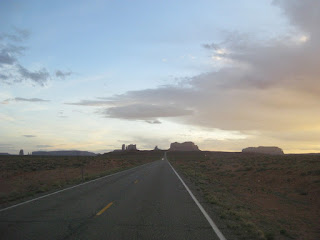 There are quite a few conflicting accounts of Hollywood’s “discovery” of Monument Valley.   According to John Ford’s biographer Dan Ford: “John had first heard about Monument Valley from Harry Carey, who had stumbled into it while exploring the Navajo country in the 1920s.  No other film company had ever worked there, and John had been waiting for years for a chance to do so.”  Later, John Wayne took the credit, telling biographer Maurice Zolotow in 1974: “I was the guy who found Monument Valley.  And I told Ford about this place.”  In Where God Put the West, author Bette L. Stanton sets the record straight: George B. Seitz was the first filmmaker to shoot in Monument Valley (when he made THE VANISHING AMERICAN in 1925), and Harry Goulding was the man who introduced John Ford to Monument Valley in 1938.

For years, Goulding and his wife were the only private land owners on the vast Navajo reservation.  They built a small trading post at the bottom of Big Rock Door Mesa, won the trust of their native neighbors, and eventually convinced the Navajos that they could all make a better living by trading in scenery.   With the help of Arizona Highways photographer Josef Muench (whose work is featured prominently in K.C. DenDooven’s book Monument Valley: The Story Behind the Scenery), Goulding pitched the location to Ford and producer Walter Wanger, who were then mounting their production of the epic western STAGECOACH.   Despite the awe-inspiring scenery, Monument Valley wasn’t an easy sell.  Wanger didn’t want to his cast and crew to be so cut off from Hollywood (at the time, there weren’t even any paved roads into Monument Valley).  Ford, however, loved the idea and eventually got what he wanted -- his own mini-Hollywood in the desert.  STAGECOACH made Monument Valley (and of course John Wayne) a star, and the filmmaker happily returned many times.  With MY DARLING CLEMENTINE (1946), FORT APACHE (1948) and SHE WORE A YELLOW RIBBON (1949), he transformed the landscape into an iconic vision of the historic American West and put Monument Valley on the map for generations of international tourists.  In the process, he also provided work for generations of Navajo natives, who still graciously share their land and their culture with us.

That wasn’t the end of Ford’s legacy in the desert.  In 1950, he asked cattle rancher George White to help him find a location for his next film WAGON MASTER.  White took the filmmaker on a tour of Moab.  When they reached the gravel bar at Nine Mile Bottom on the Colorado River, looking toward Professor Valley and Fisher Towers, Ford knew he had found what he was looking for.  WAGON MASTER is not one of Ford’s best known films -- it’s an intimate story of Mormon settlers rather than an epic story of soldiers or gunslingers, and it doesn’t feature John Wayne -- but it was one of the director’s personal favorites, and it proved to be a boon for the nascent Moab-Monument Valley Film Commission.

The following year, Ford came back to Moab to make RIO GRANDE with John Wayne.  The director and his star later returned to the Moab-Monument Valley area many times, to make THE SEARCHERS (1956), SGT. RUTLEDGE (1960), THE COMANCHEROS (1961) and CHEYENNE AUTUMN (1963).  They certainly weren’t the only filmmakers who fell in love with the place, but their use of the region was so compelling that a lot of other filmmakers were intimidated by the prospect of trying to make it their own.  I’d argue that Sergio Leone had the most success with his 1968 masterpiece ONCE UPON A TIME IN THE WEST, which brought Henry Fonda back to the place where he’d once played Wyatt Earp.

In the 1980s, a number of independent filmmakers transformed Moab into a science-fiction landscape.  When I happened upon the Movie History Museum at the Red Cliffs Lodge on Highway 128 (a B&B built on the site where Ford shot much of RIO GRANDE), I was surprised to find almost as much space devoted to these strange mini-epics as to the classic westerns of Ford and Wayne.  In addition to SPACEHUNTER: ADVENTURES IN THE FORBIDDEN ZONE (1983), NIGHTMARE AT NOON (1987), and SUNDOWN: VAMPIRES IN RETREAT (1988), the two that really caught my eye were CHOKE CANYON (1984) and KNIGHTS (1992). 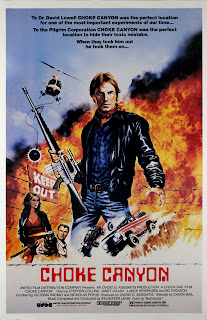 The former is an “eco thriller” starring Stephen Collins as cowboy physicist who believes that he can turn sound waves into usable energy... with the help of Haley’s comet.  (Don't ask me - I can't explain it.)  He’s at odds with a bunch of slimy businessmen who’d rather use his favorite canyon as an atomic dump site.  One of those slimy businessmen is played by none other than Lance Henriksen... who has understandably blocked this film from his memory.  For anyone who might be nostalgic about lighthearted 80s sci-fi movies, CHOKE CANYON is diverting enough, but in my opinion the only real highlight is Janet Julian.  Also worthy of note is the fact that footage from the movie was used in the MTV video for “Silent Running” by Mike & the Mechanics - one of the more memorable music videos of the early 80s.

Henriksen cuts a more imposing figure in KNIGHTS, which I like to think of as the poor man’s CYBORG.  Of course, I also think of CYBORG as the poor man’s CYBORG.... Both films were directed by Albert Pyun, who makes his movies fast and cheap but somehow nevertheless compelling.  Maybe a better way to characterize KNIGHTS would be as a rich man’s ROBOT MONSTER (1953).  Whatever the case, there’s a soft spot in my heart for this post-apocalyptic western fantasy about two humanoid robots fighting over the future of the human race.  The good robot is played by Kris Kristofferson, who pairs up with kickboxing champion Kathy Long to hunt the megalomaniacal vampire robot played by Lance Henriksen.  It’s a ridiculous story, but I don't mind because everyone seems to be having fun -- in spite of brutal shooting conditions.  Stanton’s book says that the temperature would often get well above 100 degrees, causing actors and extras to pass out from heat exhaustion.  Perhaps that explains Henriksen’s apparent delirium in his death scene, when he mumbles something incoherent about being taken away on the wings of a black bird.  (When I interviewed him for Not Bad for a Human, I asked Lance if he improvised this line... wondering if maybe it was an homage to Rutger Hauer’s death scene in BLADE RUNNER... He said he didn’t remember.) 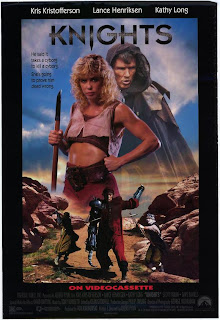 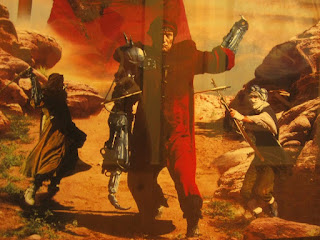 Lance actually joined me for the next part of my trip.  After taking a tour of Monument Valley with an excellent guide from Sacred Monument Tours named JT (who told us some good stories about Johnny Depp’s recent visit to Navajo country for the making of THE LONE RANGER), we headed north...  Through Four Corners, where we met some amazing local artists, including potter Bob Lansing...  Past the turn for Shiprock, a mountain that was holy to the Navajos until the Sierra Club profaned it in 1939 (also Wyatt Earp's apparent destination in MY DARLING CLEMENTINE a few years later)...  Into the Colorado mountains, toward the quiet town of Telluride. We had more business there of the post-apocalyptic sort.  But that’s a story for another time...