We spent the second half of our vacation staying in a resort on Sebago Lake, the biggest lake in southern Maine and also the deepest lake in the entire state (although Stephen King attributes that honor to the fictional Dark Score Lake in Bag of Bones).  From there we drive west and north, exploring Bridgton (featured in "The Mist" and fictionalized in Under the Dome) and Lovell (where King has a summer house that most likely inspired Gerald's Game and Bag of Bones).  We also went searching for the geographic locations of King's fictional towns of Castle Rock and Harlow, Tarker's Mill and Chester's Mill, Lake Kashwakamak and TR-90.  We even wandered briefly into New Hampshire, and saw the town hall in Jackson where the finale of The Dead Zone took place.

From what I can tell, Stephen King first began to migrate west into the Western Lakes and Mountains Region around the time he was writing the novel 'Salem's Lot.   According to one source, he finished that novel at a rental house in North Windham, on the east side of Sebago Lake.  Later his family moved north to Bridgton -- buying a house on rural Kansas Road, along the densely wooded shore of Long Lake.  This is where King wrote "The Mist," after a flash of inspiration came to him in the checkout line at the Federal Foods supermarket.  The store was later renamed Food City and featured in the 2009 novel Under the Dome.  (That means this unassuming store has survived being looted by rioters and being attacked by prehistoric monsters....)  The house on Kansas Road also served as a setting in the sixth Dark Tower book, when Roland and Eddie visit author Stephen King in the "real world" in 1977. 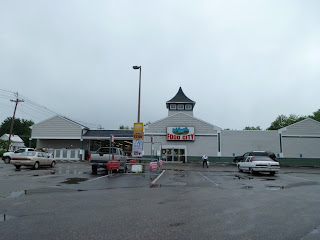 East of Food City is the town center of Bridgton.  In a recent CBS interview, King gave one interviewer a tour of the town, noting that it was his inspiration for Chester's Mill in Under the Dome.  He stopped at a historical society map on the north side of the street and pointed out the exact area where he imagined the dome had fallen.  Comparing this map of Bridgton with the official map of Chester's Mill, it's not hard to recognize similarities.  In the real town and in the fictional town, Food City exists off of Route 117 to the southeast.  The lower part of fictional Route 119 seems to correspond with the lower part of the real Route 302 (Kansas Road).  The upper part of fictional Route 119 corresponds with the real Route 93, which leads northwest to the town of Lovell -- our next stop. 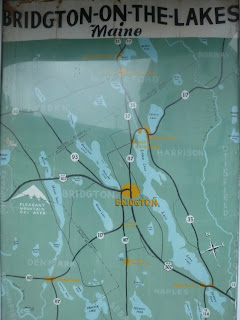 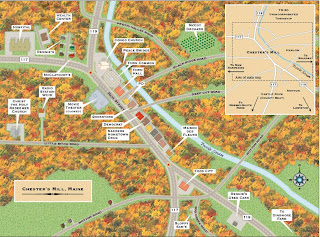 These are not the only similarities between Bridgton and Chester's Mill.  The center section of the fictional town -- including a defunct movie theater, a newspaper office (The Democrat), a bookstore, town hall, town common and a "peace bridge" -- is a mirror image of the buildings and businesses in Bridgton.  Bridgton Books sits right next door to the town hall, which is adjacent to a small park and a wooden bridge spanning a small stream.  Across the street is the movie theater, though this one is very much open for business.  Just around the bend in the road is the local newspaper, The Bridgeton News.  (The Democrat may be a tribute to a historic Bangor newspaper of the same name.)


Sweetwater Rose, the diner where the main character in Under the Dome works as a short-order cook, doesn't appear on the map of Chester's Mill... maybe because it is further north, like King's real-world inspiration.  Rosie's General Store sits across from the library in Lovell near the intersection of Route 93 and Route 5.  And, yes, there is a real Rosie (Rosie real?). 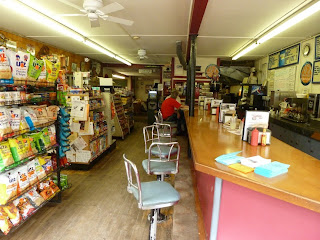 The town of Lovell is an interesting study.  It is geographically divided into four different areas clustered around Kezar Lake: Lovell village (to the south), West Lovell, Center Lovell (to the east) and North Lovell.  Historian Pauline Moore suggests that the divisions may have once represented political differences.  According to her narrative, Center and West Lovell were Republican strongholds during and after the Civil War.  The village, on the other hand, was mainly inhabited by Democrats.

Resident writer Richard Beckhard says that the town was equally fractured in the early 20th century.  He explains: "The universe of humans was divided into three classes.  1) Natives  2) Summerfolk 3) Goddamn tourists.  To qualify as a native you and your ancestors had to have been born here and spent your life here... Summerfolk were people like me, whose families had been coming here since before the turn of the century or in its early years... Goddamn tourists had two universal characteristics.  They were all rich and all dumb (about things like living, taking care of themselves, understanding nature, etc)."  Yikes.  I'm reminded of Shirley Jackson's short story "The Summer People," about the harsh fate of tourists who have the nerve to stay past Labor Day.  There's also a bit of this insider/outsider mentality in King's work, particularly his short story "Rainy Season," in which a pair of tourists are sacrificed to a plague of razor-toothed frogs!  (For the record, the people of Lovell were perfectly nice to us during our short visit, and made us feel right at home there.)

Bold outsiders Stephen and Tabitha King bought a summer home in Center Lovell in the early 1970s, and they seem to have been embraced by the locals.  No doubt it helps that they have put a lot of time and money into preserving the resources and privacy of the community on Kezar Lake.   Still, I imagine there may be some old-timers there who still think of them as "summer people." And perhaps there are some old town secrets that the Kings don't know... though I don't imagine there are any secrets in Lovell's history that would rival the dark past of the community of TR-90 in King's novel Bag of Bones.

That's not to say that King's summer home hasn't been the setting for some dark events.  On June 19, 1999, the author went for a walk on the edge of Route 5 in Center Lovell and got hit from behind by a van.  Thankfully, he survived the day and live to tell the tale.  His near-death experience inspired similar incidents in Dreamcatcher and the TV series KINGDOM HOSPITAL, and also became part of the plot of The Dark Tower series, which finds gunslingers Roland and Eddie playing the role of "goddamn tourists" in Lovell, Maine.  Their goal: to save Stephen King.  Talk about intersections of life and art!

The region north and slightly east of Lovell seems to be the geographic hub for most of the places in Stephen King's novels... but good luck finding them.   Aside from the fact that King is generally pretty vague about the locations of his fictional towns, he mixes real and imaginary points of reference.  Even more confounding: Some of his towns seem to have migrated over the years, from one story to the next.  Let me explain...

In The Dead Zone, Castle Rock is said to be "considerably west" of Pownal, and about thirty miles from Norway and twenty miles from Bridgton.  This would put the town west of the train tracks along the Royal River, west Interstate 95, and well into the Lakes and Mountains region -- maybe somewhere between Naples and Bridgton if we interpret "considerably west" as "due west."  Cujo seems to confirms thi approximate location, situating Joe Camber's place approximately twenty-two miles from South Paris (sister city to Norway).

The short story "Mrs. Todd's Shortcut" seems to place the town in the immediate vicinity of Durham, while "Uncle Otto's Truck" states that Castle Rock and Harlow are both adjacent to Waterford.  Needful Things places the town eighteen miles southwest of South Paris -- slightly west of Waterford and just east of Lovell.  But then Under the Dome places it northeast of Norway and South Paris.  If you're having trouble wrapping your head around these contradictions (and who could blame you?), he's a cheat sheet.

The simplest explanation is to say that Stephen King's "Castle County" is not a fictional counterpart to Oxford County, Maine, but a parallel or alternate reality with different rules about time and space. Driving through it means following Mrs. Todd's shortcuts through wormholes of imagination.  I have no doubt that King has intentionally avoided creating specific maps over the years, because he doesn't want these places to be pinned down in any conventional reality.

As far as I know, the author himself has only created one official map showing the location of Castle Rock.  The "Total Eclipse" map included in Dolores Claiborne and Gerald's Game places the town slightly southwest of the real town of Mexico, around south Rumford and North Woodstock. Interestingly, the same map places Motton to the northwest of Castle Rock, Lake Kashwakamak (the setting of Gerald's Game) to the east of Rangeley and TR-90 even further north (somewhere near Eustis, in Franklin County).  If we use this as an "official" point of reference, then many of the literary references from King's novels are out the window. 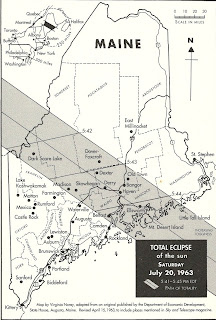 Traveling east from Lovell, we passed a Saint Bernard breeding place ("All Saints" something) that suggested we were on the right path for Castle Rock.  Later, in Milford, we passed a vacation house called "The Enchanted Dome" -- another stranger-than-fiction clue?  For the most part, however, there wasn't much to see north of Norway-Paris except trees and logging trucks.  North Woodstock, a prime candidate for the "real" Castle Rock, was just a cluster of houses and a T-intersection.  I didn't even see a road sign with the town name, only directions to Rumford.

Of course I didn't expect to "find" Castle Rock... but what I found was just as revealing.  We passed through several small communities that must be recognizable only to the locals.  As historian Page Helm Jones points out, the towns in this region appear to the outsider like indistinguishable settlements built up around old mills on the Androscoggin River.  Jones writes:

"Here again we find the New England penchant for town independence for these towns are really one and the same community but retain their distinct governments.  Rumford, with its close to ten thousand and Mexico with nearly five thousand inhabitants, but each with their own fire and police departments and town fathers, are again communities, almost totally dependent on one industry.  Here it is the Oxford Paper Company, an intengrated pulp and paper concern which specializes in fine book papers and coated magazine paper for the 'slicks.'"

As one continues driving north, the communities become even more anonymous to the outsider... little more than names on a map.  Residents no doubt know all the nuances and defining characteristics of these places, but we "goddamn tourists" know nothing.  We see only a fearsome wilderness -- and perhaps that's appropriate.  For me, at least, it sustains the mystery of Stephen King's creations.  On a remote and solitary road like Route 17 toward Rangely, it is easy to believe that you have left the real world behind and crossed over into the unknown.  This is a place where it is easier to believe in ghosts and aliens and things that go bump in the night.  And beyond that...

Stephen King says that he loves Maine because much of the state is still undiscovered country.  To him, the line between the possible and the impossible seems thinner in the country, and all but invisible in the darkness of the northern woods.  What better place to conclude our little jaunt?  Travel safe and dream carefully.
Email ThisBlogThis!Share to TwitterShare to FacebookShare to Pinterest
Labels: Stephen King