I have never been shy about expressing my love for David Lynch’s TV series TWIN PEAKS.  I did it here.  Here.  And here.

Somehow, this series manages to balance the uncanny darkness of a feverish nightmare with the transcendent lightness of a mystical experience.  The series isn’t everyone’s cup of coffee, but I recently re-watched Season Three and I remain spellbound by Lynch’s unique method of storytelling.  There is an undeniable mystique about his fictional universe—and much of it is rooted in the Pacific Northwest, where the filmmaker grew up among shadows and tall trees.

I visited the Pacific Northwest for the first time this past week, and was overwhelmed by the lushness of spring.  Maybe it’s because I have been living in a desert for 12 years, but I just couldn’t get over all the moss.  It seemed to me that if I stood in any one place for very long, I would end up looking like Jordy Verrill.  (Sorry, I just couldn’t resist one more Stephen King reference.  Somehow, his stories seem to belong here too.)

We started our TWIN PEAKS tour near the town of Edgewick, in the shadow of two small mountain peaks, at the Twin Falls Trail.  I don’t think these specific places inspired the series, but it’s hard to know for sure.  So many places along the Snoqualmie River (especially businesses) share names from the series that it’s hard to know which came first; hard to tell where reality ends and fiction begins.  This area was used as the backdrop for a gateway between worlds in Season Three. 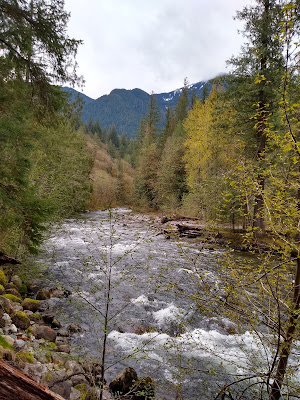 We followed the Snoqualmie River east to the town of North Bend and one of the most iconic locations in TWIN PEAKS: the Double R Diner.   The real diner, called Twede’s Café, is actually pretty unassuming.  At least, it was on the lazy Tuesday afternoon when we stopped by for some damn fine coffee and cherry pie.   The interior is thoroughly decorated with behind-the-scenes photos and news clippings related to the series.  And, yes, the cherry pie is amazing. 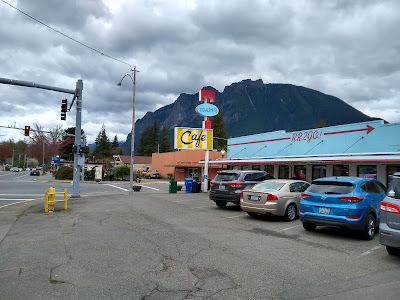 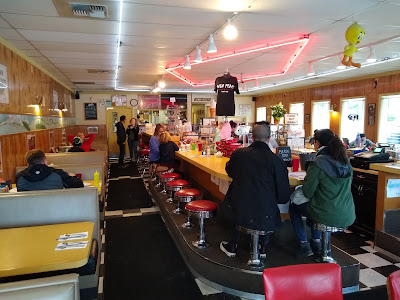 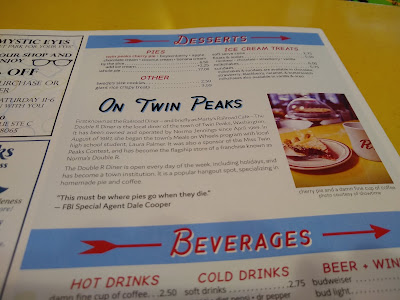 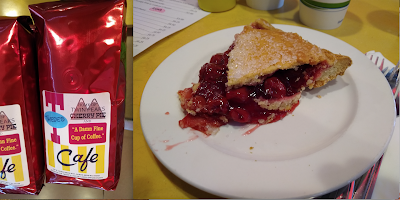 We drove north and continued east on Reinig Road, beside the river and beneath the looming monolith called Mount Si.  This is where the “Welcome to Twin Peaks” sign stood in the opening credits of the original series.  More recently, a replica of the sign was placed in the same spot—but quickly stolen by vandals.  So you’ll have to use your imagination. 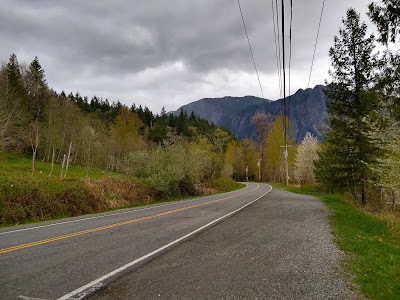 Just a few hundred steps to the east is a fork in the road where we found three more sites associated with the show.  In the original series, this intersection was known as Sparkwood and 21.  To the north on 396th Drive is the old Twin Peaks Sheriff Department, now the DirtFish rally school.  The building and the lobby still look pretty much the same, but I was stunned to see what was out the front door.  It had never occurred to me that, throughout three seasons of TWIN PEAKS, we never see a turnaround shot.  Apparently, at one time, the Packard Sawmill sat right next to the Sheriff Department.  Today, there’s not much left of the old mill. 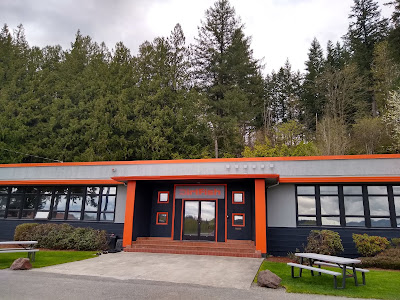 Back on Reinig Road, just past the turnoff for 396th, we encountered a small railroad bridge that has been converted into a footpath.  It leads down into the town of Snoqualmie, which is the closest thing you’ll find to an actual town of Twin Peaks.  This is where the kids went to high school in the first two seasons, at Mt. Si High School (currently under construction and unrecognizable from the show).

Fans will recognize Reinig Bridge as the spot where the traumatized Ronette Pulaski is seen wandering back toward town.  Despite the fictional air of torture and tragedy, it’s a beautiful location and a great place to observe the swirling, hypnotic eddies of the Snoqualmie River as seen in the opening of the original series.